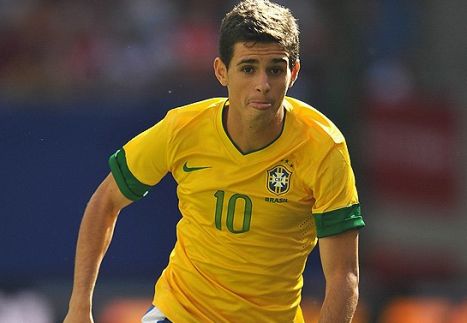 Oscar dos Santos Emboaba Junior is a young Brazilian footballer who is lovingly called Oscar by his followers. At the age of 22, Oscar has achieved remarkable feats in the game of football. Beginning his career with Sao Paulo FC, Oscar now plays for the Chelsea club. He also plays for the Brazilian national team at his preferred winger or attacking midfielder positions. People like him for the way he positively came out of the controversies faced at Sao Paulo FC. He was a star player at that club and even remained so after he got associated with Chelsea in 2012.

Oscar played marvelously at 2012 London Olympics where he represented Brazil at the under-20 level. He took his performance as an opportunity to gain advancement in the game. After playing wonderfully at the Champions League, he shared with his fans that he felt really proud to have realized the dream of playing in the Champions League. According to him, young footballers take it as a dream to play in this league and he has achieved that feat. Playing against Juventus, his extraordinary strike was later adjudged as the Chelsea “Goal of the Season.”

Displaying a good performance over a short time period has made Oscar impress thousands of people who have started comparing him with some established footballers like Kaka and Özil. Oscar has shown creativity and flexibility in his game. He is considered to be a nice playmaker with superb dribbling and passing skills. His clever runs are hard to assess, and that offers advantage to his team against any opponent. Observers of his game tell that Oscar is very innovative under difficult situations, as he can carve out chances very well. Receiving so much appreciation from established players and seniors has really made Oscar special in the eyes of all soccer lovers.